gives a sense of mystical or magic to the people who don’t know the background. Qi Men
Dun Jia may be applied to business, crime-solving, marriages and matchmaking, medical

is translated as ‘Strange Gates Escaping Techniques’. According to Ho, Qi Men Dun Jia is a
combination of 2 forms of arts – Qi Men and Dun Jia.

It was recorded in the Chinese history that Qi Men Dun Jia, together with Da Liu Ren and Tai

Yi Shen Shu as the highest Three Arts or Three Styles (三式 sān shì) in Chinese Metaphysics.
It was said that these Arts can only be practice by the Emperor or their advisors.
Commoner will be executed if being caught practicing it.


Using straw boats to borrow arrows
From Wikipedia, the free encyclopedia
Before the Battle of Red Cliffs, Zhuge Liang visited the Wu camp to assist Zhou Yu. Zhou
Yu saw Zhuge Liang as a threat to Eastern Wu and was also jealous of Zhuge Liang's talent.
He assigned Zhuge Liang the task of making 100,000 arrows in ten days or face execution for
failure in duties under military law. Zhuge Liang promised that he will finish this seemingly
impossible task in three days. He requested 20 large boats, each manned by a few soldiers
and filled with straw human-like figures. Before dawn, with river fog cloaking his
movements, Zhuge Liang deployed his ships. He ordered his soldiers to beat war drums and
shout orders so as to imitate the noise of an attack.
Upon hearing the drums, the Wei soldiers rushed out to meet the "attack". Zhuge Liang drank
wine with Lu Su on one of the boats. The Wei soldiers were unable to see through the fog and
fired volleys of arrows at the sound of the drums. The straw figures were soon penetrated by
many arrows, which became stuck in the straw. Zhuge Liang returned to Wu in triumph.
After removing the arrows from the straw figures' bodies, Zhuge Liang discovered there were
over 100,000 arrows.
It was said that Zhuge Liang used Qi Men Dun Jia to get the correct timing and direction of
river fog.
Battle of Red Cliffs (赤壁之戰)
Zhuge Liang wanted to burn up Cao Cao’s fleet of chained ships and knew that it could only
be done by launching arrows with fire with the help of east wind. Zhuge Liang set up the
Seven Stars Altar and prayed for the east wind. In a short time, the east wind was in full force.
Zhuge Liang used Qi Men to predict the timing of the east wind and uses the Seven Stars
Altar to buy time and to create mystery of the entire strategy.
Jiang Ziya
From Wikipedia, the free encyclopedia
姜子牙, Pinyin: Jiāng Zǐyá, was a Chinese historical and legendary figure who resided next
to the Weishui River about 3,000 years ago. The region was the feudal estate of King Wen of
Zhou. The last ruler of the Shang dynasty, King Zhou of Shang (16th - 11th century BC) was
a tyrannical and debauched slave owner who spent his days carousing with his favourite
concubine Daji and mercilessly executing or punishing upright officials and all others who
objected to his ways. Jiang Ziya had once served the Shang king and had come to hate him
with all his heart. He was an expert in military affairs (i.e. Qi Men Dun Jia) and hoped that
some day someone would call on him to help overthrow the king. He waited and waited till
he was 80 years old, continuing placidly with his fishing in a tributary of the Weihe River
(near today’s Xi'an) using a barbless hook or even no hook at all, on the theory that the fish
would come to him of their own volition when they were ready.

Zhang Liang (Western Han)
From Wikipedia, the free encyclopedia
張良; pinyin: Zhāng Liáng; 262 BC – 189 BC, was a strategist and statesman of the early
Han Dynasty period of Chinese history. He is also known as one of the "Three Heroes of the
early Han Dynasty" (漢初三傑), along with Han Xin and Xiao He. Zhang Liang contributed
greatly to the founding of the Han Dynasty.
To avenge the fall of his native state, Zhang Liang dedicated his efforts to hire assassins to
kill Qin Shi Huang. Qin Shi Huang survived the assassination attempt, after which he issued
an order for the arrest of Zhang Liang. As a wanted man by the government, Zhang Liang
travelled to Xiapi and stayed there for some time, using fake identities to evade the
authorities. One day, Zhang Liang took a stroll at the Yishui Bridge and met an old man there.
The man walked towards Zhang and chucked his shoe down the bridge on purpose, after
which he yelled at Zhang, "Hey boy, go down and fetch me my shoe!" Zhang Liang was
astonished and unhappy but he obeyed silently. The old man then lifted his foot and ordered
Zhang to put on the shoe for him. Zhang was furious but he controlled his temper and meekly
obliged. The old man did not show any sign of gratitude and walked away in laughter. The
old man came back after walking a distance and praised Zhang, "This child can be taught!"
and he asked Zhang to meet him at the bridge again at dawn five days later. Zhang was
confused but he agreed. Five days later, Zhang rushed to the bridge at the stroke of dawn but
the old man was already waiting for him there. The old man chided him, "How can you be
late for a meeting with an elderly man? Come back again five days later!" Zhang Liang tried
his best to be punctual the second time but the old man still arrived earlier than him, and he
was scorned by the old man once more and told to return again five days later. The third time,
Zhang Liang went to the bridge at midnight and waited until the old man appeared. This time,
the old man was impressed with Zhang Liang's fortitude that he presented Zhang with a book,
saying, "You can become the tutor of a ruler after reading this book. In ten years time the
world will become chaotic, and you can use your knowledge from this book to bring peace
and prosperity to the empire. Meet me again thirteen years later. I'm the yellow rock at the

foot of Mount Gucheng." The old man was Huang Shigong (黃石公; aka "Yellow Rock Old
Man") of the legendary "Four Haos of Mount Shang" (商山四皓), a group of four reclusive
wise men. The book was titled The Art of War by Taigong (太公兵法) and believed to be the
Six Secret Teachings by Jiang Ziya.
Liu Bowen
Liu Ji (1311 - 1375), style name Bowen, was a key military consultant of Zhu Yuanzhang,
the founder of Ming dynasty. It was said that Liu Bowen used Qi Men Dun Jia skill to bring
the Ming dynasty to the throne.
Mao Zedong
毛泽东 Máo Zédōng (December 26, 1893 – September 9, 1976) was a Chinese
revolutionary, political theorist and communist leader. He led the People's Republic of China
(PRC) from its establishment in 1949 until his death in 1976. It was rumor that Mao actually
used Qi Men Dun Jia to win battle with Kuomintang. In some of the battles, Mao actually
dictated the actual timing and direction for the troop to be deployed, which is the signature of
Qi Men Dun Jia. 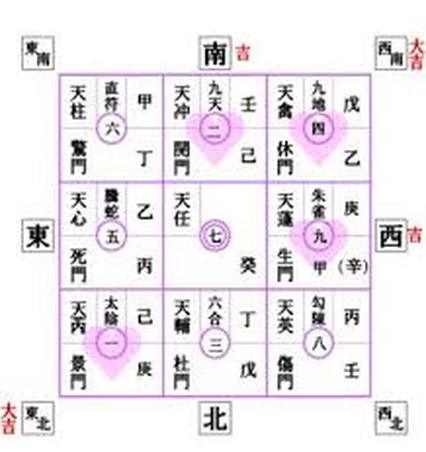 The 9 Palaces 8 Trigram is basically the Post-Heaven Trigram arrangement. Each Trigram is
called Palace (宫) and has associated element and direction. It is used to determine the state
of interaction between other elements of Qi Men. In addition, it is also being used to
determine the direction or timing of certain things happening/about to happen.
The following chart shows the element of each palace and the associate family members:


following chart shows the element of each palace and the associate family members: 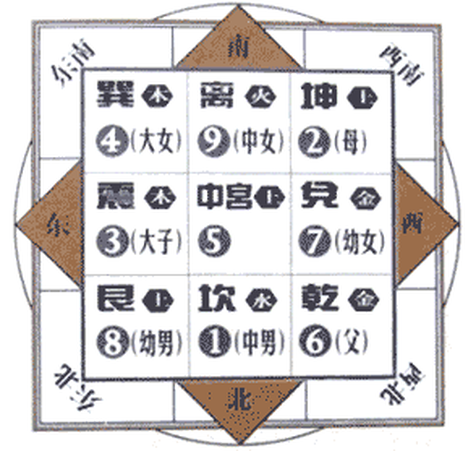 地盘Di Pan (Earth Plate)
The Di Pan consists of the Post-Heaven Trigram or Ba Gua and 12 Earthly Branches. The
placement in the 九宫八卦图 (9 Palaces 8 Trigram chart) as follow: 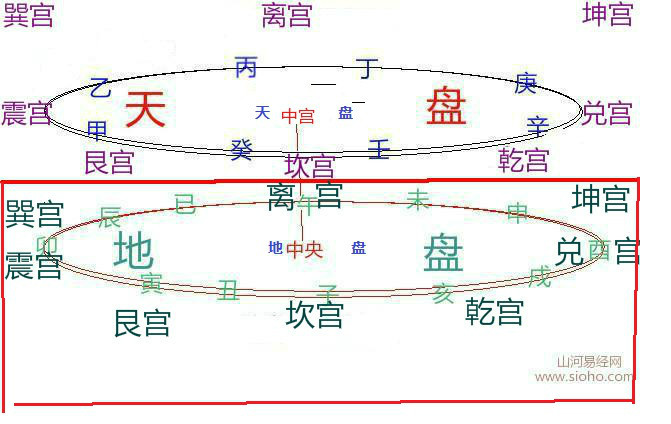 Create your own unique website with customizable templates.
Flying star